Early on in my marriage I wasn’t exactly a gardening diva. In fact, I had very little interest in gardening. But my husband’s father, Louie, had gardening in his veins. I fondly remember going to his house and weaving my way through narrow passageways of seedling flats in his garage. Soon, the flats were transferred to a small greenhouse set up in his driveway. It wasn’t long before friends, neighbors and strangers were stopping in to buy his plants and engaging in some of the most colorful conversation they had ever had. 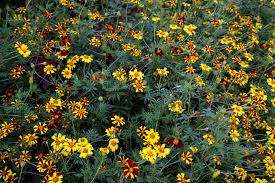 Louie, the ultimate salesman, always touted each variety of flower he grew, but none seemed to rival his affection for marigolds. Yes, I said marigolds! It’s not just the marigold’s distinctive scent that causes many seasoned gardeners to turn up their noses. What is it then, that brings many to dismiss them? Could it be that we have become gardening snobs, believing we have progressed too far in our botanical knowledge to extol such a lowly flower, as though it is only reserved for the commoners and unsophisticated gardeners? I hope not. I long to bring marigolds back to their once revered reputation. It’s name alone expresses how admired and respected it once was. In fact, marigold or “Mary’s gold,” was named after the most revered of all women in history, the Virgin Mary, and were believed to bring good luck. Originally discovered in Central America in the 16th century by the Portuguese, it was brought back to Europe where it grew in popularity. Today in South Asia, yellow and orange marigold flowers are grown and harvested by the millions to make garlands used to decorate statues and buildings. In Mexico and Latin America, marigold flowers are used to celebrate All Saints Day and All Souls Day, and flower heads are scattered on relatives’ graves. So, it stands to reason that they should receive an honored place in our own gardens. Through the years many hybrids have been developed to bring out the most desirable characteristics like large flower heads, various plant sizes and unique colorations.

Perhaps the furthest advances in breeding, however, have been in diminishing one of its most notable qualities: its scent. Many people find the scent offensive. I personally find it’s something that one needs to learn to appreciate. I like to think of it like coffee; when I first tried coffee, I couldn’t understand why anyone would drink such an awful concoction. But with time I came to acquire a taste for the brew and now I love to greet each morning with a hot cup of coffee. And likewise, I love to greet each spring with marigolds.

Many use marigolds to outline garden beds or vegetable plots, believing they help keep out rabbits, deer and insects. While marigolds can deter some pests, they are not the all-purpose pest and plant repellent that people have been led to believe they are. Yet the marigold itself is virtually pest and disease free, with the exception of their arch-nemesis, earwigs 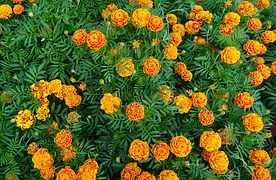 , which like to nestle and munch inside its tightly clustered flower heads. Despite countless breeders’ attempts, very few new color varieties of marigolds have been developed. The most common remain the yellow, gold and orange varieties seen in garden centers and catalogues. You will not find a pink marigold… yet.

Burpee’s Seeds, however, has done exceptionally well with developing unusual white varieties of marigolds. ‘French Vanilla’ is my personal favorite. It’s scent is light and pleasant, and is one of Burpee’s earliest triumphs in hybridizing white marigolds. It grows to 2’ with large 3½” flower heads and deep green foliage. The blooms are white with a hint of cream. Other notable white varieties include ‘Snowball’ and ‘Snowdrift’. Burpee’s Seeds played a major role in making the marigold among the most used flowers in America. After sweeping over Europe and Asia in popularity, David Burpee saw the promise in marigolds. In 1915 he took over the seed company founded by his father, W. Atlee Burpee. Young David felt that marigolds held promise and decided to feature them in his catalog and fund research. If you love giant flower heads, try the ‘Inca’ or ‘Inca II’ varieties. These giants produce 4-5” flower heads of bright yellow or orange on stocky 20” plants. If you’ve driven down South Oneida Street in Appleton during the summer, you’ll notice this variety lining the streets of Marigold Mile. Many other great varieties are available. Here are the three most common types of marigolds:

The marigold. It’s no fuss, easy going, with a bright and sunny disposition. It may not be the flashiest of flowers or even the most impressive. It’s good at highlighting others around it, and is reliable, strong and simple. But I suppose that is why I love the marigold so much. Its attributes, character and charm remind me of Louie, who has sadly since gone on to meet the Master Gardener of all gardeners. It is partly because of him that I am so passionate about starting my own seeds, and I will always grow ‘French Vanilla’ marigolds in his memory.