There are thousands of beautiful, comparatively trouble-free plants that never show up in garden centers. The reasons for their absence are as various as the sellers who don’t stock them (and the wholesalers who don’t supply them), but whatever the problem is with hops, it’s not that they’re hard to grow.

Common hop (Humulus lupulus) is hardy in zones 4 to 8, and thrives in almost any well-drained soil of moderate fertility. The vines want sun but will climb to find it, so you can plant them in partial shade if you don’t mind scantily clad stems in the lower regions. Their main vulnerability is to fungus diseases, so don’t plan hops where they will be crowded, and be sure they get good air circulation.

There are lots of varieties to choose from, though many have subtle differences interesting only to brewers. From the ornamental standpoint, the big choice is between the green-leaved sorts and the cultivars that have golden foliage. There is also an ornamental hop, H. japonicus ‘Variegatus,’ with variegated foliage in green and white.

The cone-shaped flowers of the female hop plant are pretty as sculpture but not especially showy or colorful, and they have a strong odor some people find unpleasant. You’ll need a female if you do want the flowers — for viewing, brewing, or putting in hop pillows to promote peaceful sleep (see below). Otherwise, get a male; it too has flowers, but they are much smaller.

The planting site should be one with lawn around it and a tall, strong trellis (or sturdy tree) on which the hop can grow; these vines tend to run both immense and amok. The immensity is mostly straight up, and amok is easy to control by mowing, but beware of putting a hop at the edge of uncultivated land. Once the roots are well established, new shoots can come up 15 feet — and more — away from the parent plant.

Hop Pillows: Hops are the flowers (also called seed cones or strobiles) of the hop plant Humulus lupulus. They are used primarily as a bittering, flavoring, and stability agent in beer, to which, in addition to bitterness, they impart floral, fruity, or citrus flavors and aromas.Scientific research shows that hops, with its natural sedative effects, can increase sleep time. Hops also helps to lower body temperature—falling core body temperature is one important physiological step toward sleep. Hops has also been shown to reinforce the body’s daily bio rhythms of rest and activity. Hop pillows can be made by hand or purchased via various sites. 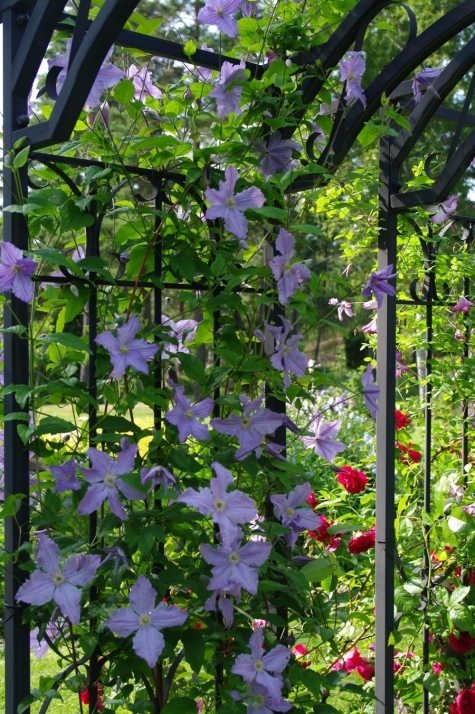 A clematis in full bloom can take your breath away. Who hasn’t erected a trellis with the dream of seeing it covered with vibrant red or purple flowers in late spring? But how do you get your clematis to grow as lush and beautiful as you see in magazines or in your neighbor’s garden?

First, you need to know your vine so you can understand the proper pruning that it needs. Your clematis will survive, and even bloom, with no pruning. But with the right pruning, it’ll grow and bloom more vigorously.

Before that, though, let’s understand how to plant for success.

So, how do you prune a clematis? Timing is important: don’t prune in the fall. It will encourage the plant to emerge from dormancy at the first hint of a warm day — which could be in January and your plant will die. No matter where you live, let your clematis stay dormant until spring.

Before you start cutting, you’ll need to know which pruning group your clematis is in: A, B, or C. If you don’t know, just watch it for a year. First pay attention to when it blooms. Second, notice whether it blooms on woody stems that grew last year and then survived the winter (old wood) or green, flexible stems that came from a main stem this year (new wood). Once you know this, you can usually put your clematis into group A, B, or C.

The University of Maryland Extension has created a wonderful little brochure that explains exactly how to prune each of the categories of clematis to ensure the best results.

Now that you know these secrets, you no longer have to wonder how to get those spectacular flowers you see in photos — you’ll be enjoying your own!

*Not currently testing your soil before planting? Shame on you! To ensure the best success for your gardens, it’s important to know if your soil is helping or hindering your efforts. Read our earlier blog post on doing soil testing here.