Whether you have a large plot or a small patio garden to work with, fresh veggies and herbs that highlight different countries around the globe are both fun and functional. Some tips:

Cook up the freshest fare around with these must-have ingredients. The number of chili varieties out there is endless — choose a few to spice up your life.

The vegetables and herbs in this region are as varied as the cuisine itself.

These exciting vegetables may be used in stir-fries and salads, or to accompany Chinese dishes. Use fermented cabbage in kimchi.

If you get a chance, visit the Cleveland Cultural Garden in Cleveland, Ohio. Featuring 31 gardens that are each inspired by a different ethnic group — Polish, Greek, Italian, German, Hebrew, Irish, Chinese, African-American, and Indian, to name a few — the Cleveland Cultural Garden in Rockefeller Park is a must-stop destination in Ohio. For more information, visit culturalgardens.org.

Time to start planning that flower garden for this summer. Sunflowers are one of the best plants you can have in your garden. You can attract the following bird species: cardinals, chickadees, house finches, titmice, grosbeaks, nuthatches, goldfinches, red-bellied woodpeckers, and pine siskins.

You can find many sunflower options on the market today, but not all of them are suitable food sources for birds. When selecting sunflowers, make sure they produce a good supply of seeds. Some of experts’ top picks include Mammoth Grey Stripe, Paul Bunyan, and Aztec Gold.

Sunflowers are truly one of the easiest plants to grow, but they do have a few requirements. They need at least six hours of sunlight per day and well-drained soil. They benefit from organic matter, and also keep the area under sunflowers mulched for better results. 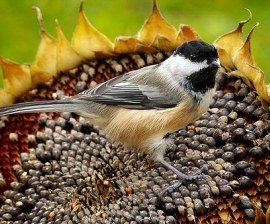 Sunflowers have the best seed buffet in late summer to early fall. For longer harvest time, stagger your planting, early spring to midsummer. This way, you can attract birds for months.

Gather your sunflower heads, and put them in a dry place to dehydrate. You can then hang them out by your feeders, extending the sunflower season all the way into fall.

There are many ways in which we display our plants: indoors, outdoors, in pots, hanging baskets, and many more. Depending on your situation, there are different considerations when choosing the soil or growing medium you will use. Below are some basic rules of thumb.

Use a sterile soil-less seed starting mix. One brand name example is Jiffy Mix. However, there are others available. In fact, I used Fafard Super Fine brand mix this year and absolutely loved it. As its name suggested, it was super fine without clumps or filler. I tried Schultz brand seed starting mix and found that it was too lumpy and my finer seeds like impatiens and nicotiana had a hard time germinating in it.

Once your plants have germinated in your seed starting mix and have a couple true leaves you can transplant them into a container with potting mix. Do not use straight seed starting mix for your transplants because it has very little nutrient value, and as your plants grow they need nourishment. Also, do not use regular garden soil. It is too dense and can smother you’re seedlings, plus it may contain weed seeds and unwanted disease and pests. 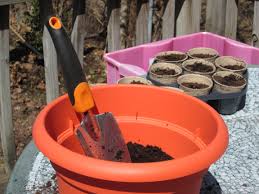 A proper soil mixture is important for potted plants because the roots are restricted by the pot and not free to spread. It’s important to find the balance between good moisture retention and good drainage. There are standard potting mixes available at garden centers, or some potting mixes come with fertilizers already in them. One common brand is Miracle Grow. However, there are generic brands available as well. If you prefer not to spend the extra money for the fertilizer type, you can mix in about 1/4 – 1/3 compost and peat moss into your mixture for an added boost. Or you can add in your own time-release fertilizer. A little sand or perlite added to the soil will also improve aeration and drainage.

There are some potting mixes that tout “moisture control” as a feature. I personally do not like them. All they’ve really done to attain this is add more filler like wood chips, then charge you more money for it! If I am concerned about keeping my outdoor potted plants from drying out, I use a product called Soil Moist and mix it in the soil. It is a granular moisture absorbing product that has worked great for me. It is especially useful in hanging baskets which seem to dry out quickly. I have even used it directly in the garden bed around those plants that prefer wet feet. It’s important to not use more than the recommended amount or you may actually drown your plants.

Much of the same directions apply to indoor potted plants as outdoor potted plants. However, there are some things to avoid. Do not use compost or manure in your indoor pots. The reasons may seem obvious, but in addition to the potential odor, you may be introducing unwanted disease and pests into your home. Also, since your indoor environment is a controlled atmosphere, elements like wind, rain and fluctuating temperatures are not a factor. So, the use of moisture retentive products is unnecessary. Even more crucial than with outdoor plants, always use a container with a drainage hole in the bottom to avoid root rot and disease. To avoid disease and pests, you can sterilize your growing mix in an oven at 400 degrees for an hour. This kills most bacteria, larvae, weed seeds and insect eggs.

Cacti require much more drainage and aeration than regular house plants. You can 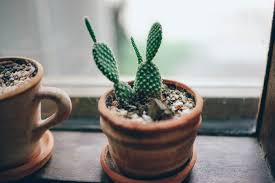 purchase a pre- packaged potting mix especially formulated for cactus. However, if you want to concoct your own mixture, try the following simple recipe: Equal parts commercial potting soil and builders sand. You can add a tablespoon of lime to a gallon mixture of this as well. They prefer an alkaline soil. Cacti prefer to be in unglazed clay pots with a layer of course gravel and charcoal in the bottom. Most Cacti have far ranging lateral roots so a shallow, wide clay pot is preferred. Put a thin layer of crushed gravel on the top of the soil surface to help stabilize the plant as well.

Keep these tips in mind for the next time you’re transplanting your favorite plants. Give them the right conditions and they’ll thrive!

All peppers and chilies are members of the capsicum family and it could be argues that the differences among the many varieties are merely a matter of taste. But what a taste! Sweet or bell peppers are large, sweet, and mild. Chilies, in contrast, are small and hot — sometimes so eye-wateringly hot that eating them is downright foolhardy. Growing them isn’t difficult, however, provided you can give them the sunshine, warmth, and water they need.

Peppers and chilies like a light, fertile soil that retains moisture. More importantly, because they are tropical or subtropical plants, they require heat and humidity. Unless you are growing them under cover, choose a planting position in a sheltered, sunny spot.

Peppers and chilies need heat to germinate, so sow indoors in modules and pots in March and April, and plant out only when it is warm enough, in May and June. Sowing directly outdoors is hit-or-miss.

Peppers and chilies need a long growing season in order to ripen fully, especially in temperatures like we get in Wisconsin. Get ahead by raising seed indoors — at temperatures of 64-70ºF in order to guarantee germination. Harden off seedlings and plant them out only when all danger of frost has passed.

Weed and water regularly and feed every two weeks with general fertilizer or a special liquid tomato food once the first small fruits appear. Stake up plants if they become heavy.

Most sweet peppers change color as they mature. They start off green, then turn yellow, orange, red, or even dark purple when fully ripe. Picking them young will stimulate the plant to produce more fruits, but the young peppers won’t taste as sweet.

Chilies vary in power from the very mild, which produce no more than a slight tingle on the tongue, to fruits so hot that you need to wear gloves to handle them. What gives them their heat? It’s a chemical called “capsaicin,” concentrated in the seeds and white pith. It stimulates the nerve endings in your mouth, throat, and skin.