As a person who works full time and often doesn’t get home until early evening, I sometimes feel like I’m missing out on the prime hours for enjoying my garden blooms. By the end of the day many flowers can look tired, and some, like morning glories, have already shriveled up in the day’s sun and heat. So, when I discovered flowers that saved their best show for the evening hours, it intrigued me. Now, many of these late-day bloomers are on my list of favorites.

Typically, flowers classified as those fitting for a “moon garden” won’t open until night or late afternoon. However, there are others that may be open all day, yet release their intoxicating scent as evening approaches. This is one of the main reasons I love to grow some of these beauties in pots or near walkways, so I can enjoy their lovely scent as well.

Why do some flowers wait until darkness approaches to open? Well, there are several night-flying pollinators such as moths that feast on these beauties. It’s suspected that the alluring fragrance helps attract insects when low light conditions can make them more difficult to find. This may also explain why these types of flowers are often white. The light color is more likely to reflect the moonlight and advertise their beauty to passing moths and other insects. Personally, I feel white is underutilized in the garden and I love mixing it in with colorful annuals to make them pop. Here are the top five favorite moon garden flowers I’ve found through the years. 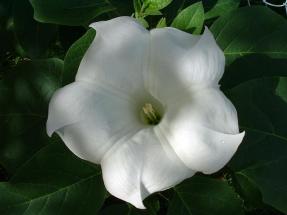 Moonflowers have large 6” flowers on 8-15’ vines that look similar to morning glories, which is understandable since it is a close relative. On a warm summer night you can literally watch the large blooms unfurl from their twisted bud in a matter of minutes. It’s often the subject of time-lapse photography for this reason. The blooms open at dusk, but close by noon the next morning. But not to worry, the vine will produce blooms in abundance from day to day. It is a tender perennial vine that is winter hardy to Zones 10-12, but grown as an annual here in full sun. It can grow to 70’ in more tropical climates. Start seed indoors about 6-8 weeks before last spring frost date. Starting seeds outdoors delays the onset of blooms until too late in the season to be fully enjoyed. 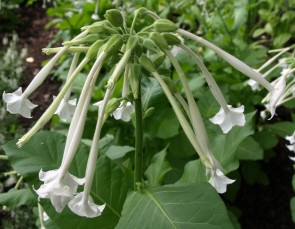 I have grown this towering heirloom variety for several years from seed. It’s hard to imagine that the dust-like seed can grow to become this stately 5-6’ plant. It is often referred to as Woodland Tobacco, and has 3-4″ hanging trumpet-shaped white blossoms. Once again, it is a tender perennial, grown as an annual. The white blooms open towards evening with a delightful light scent. It prefers average to fertile soil and may need staking in windy sites. It may reseed, but I’ve not had a problem with it becoming invasive. The leaves are very large at the base, forming a rosette of dark green, from which the tall spike of dozens of white trumpets grow. It does well in light shade.

As their name suggests, these beautiful tender perennials open late in the day on bushy plants with lush, glossy foliage. It is also known as the Marvel of Peru, also a very fitting name, since the Latin definition of its genus name means “amazing, wondrous, or remarkable.” A fifitting name for the tubular trumpet-shaped flflowers that just keep coming day after day in abundance. In Wisconsin it is grown as an annual. Even so, the plant grows quickly and can almost appear shrub- like for use as a small hedge, growing to three feet. Unlike many other night bloomers, these trumpet-shaped flowers are available in a number of beautiful colors ranging from red, yellow, pink, blue, white and even some beautiful marbled varieties. They prefer full sun. Their fragrance truly is outstanding. I had a plant in a large pot near my front door and loved sitting on the steps taking in the heady perfume. 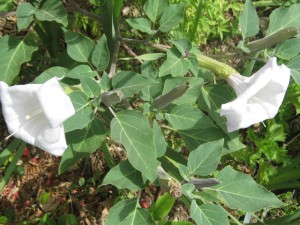 This plant can become quite large, resembling a small shrub or bush with medium sized leaves having a bluish hue. The flowers are large, facing upright, and opening towards evening. The name Angel Trumpet may refer to the angel of death, however. The plants are poisonous, so care should be taken in handling them. Daturas are so lethal that they have been used throughout history and literature as a means of killing a person. The cosmic-looking 2” seed pods with their bristly shell appear as from another world and have been known to reseed themselves. Despite its obvious faults, it is a beautiful flower, that properly placed, can add interest to your garden. 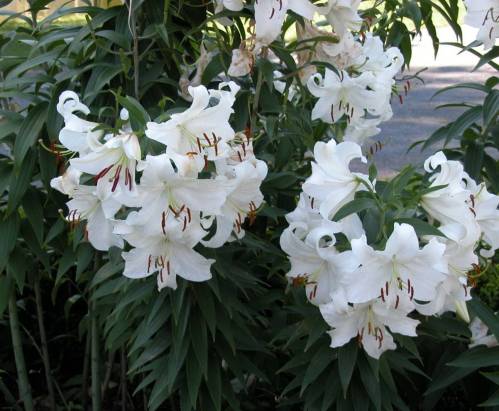 Technically not a night bloomer, the Casa Blanca Oriental Lily is readily incorporated into moon gardens because of its fragrance. In fact, it is one of the most fragrant flowers I have ever grown. One need not bend down to smell it, as its scent can be appreciated from yards away. Unlike most moon garden flowers, its blooms can last for more than a week, but each day its fragrance intensifies towards evening. Its immense 10″ flowers are so large that the thick stems may need some staking in windy locations. If you choose to grow one lily, this should be it. In my book, it’s a must-have.

Be sure to try some of these beauties in your moon garden and enjoy their intoxicating beauty and fragrance.

One thought on “Moon Gardens”