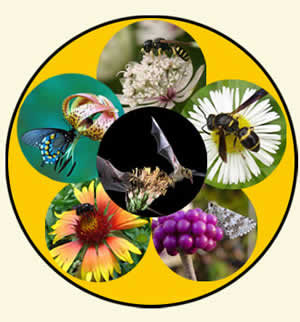 From bumblebees to honeybees, wasps to butterflies, and even some birds and rodents, pollinators come in all shapes and sizes.

There are 22,000 known species of bee, but their numbers are dramatically falling. All bees are vitally important to this planet and all those who inhabit it, although some are deemed “better” at their pollination jobs than others; honeybees for example typically fare better than bumblebees.

Bees prefer ‘single’ flowers, that stand alone and are well open to allow their stout bodies to access them – some great examples include daisies, dahlias, and irises. Double flowers, where there are lots of folds and structure, are more difficult for these insects, and are often ignored in favor of the more easily crawlable flowers. They also enjoy tubular flowers, which allow them to crawl deep inside the plant to feast on the nectar – flowers such as snapdragons, foxgloves, and honeysuckle are perfect. Bees seem to be especially attracted to the color purple, which is likely why they are often seen buzzing around lavender bushes. Other purple favorites include alliums, thistles, heather and geraniums.

Hoverflies are masters of disguise – they look just like a bee or wasp until they land and you can see them better. They are incredibly docile and lack any sting or fangs whatsoever. They are also very important pollinators, that are responsible for visiting flowers all over the world. They do such a great job in fact that they are widely considered to be the second best pollinators in the world, after wild bees.

Another important fly to consider is the humble midge – we swat at their pesky antics in mild weather and probably swallow more than we care to think about when we’re trying to get about outside, but without these little blighters we would not have chocolate; midges pollinate the tiny white flowers of the cacao plant, enabling the tree to produce fruit. That in itself is worth a mention – thank you midges, and we promise not to get annoyed with you again.

Pollinating flies don’t seem to be fussy – they have been spotted buzzing away on almost any plant. Chances are when creating a garden designed to attract the other pollinators on this list, these guys will also show up, eagerly getting in on the action. Like most insects, they benefit greatly from wildflowers that we often classify as weeds – dandelions, yarrow, buttercups and trefoil being just some examples. 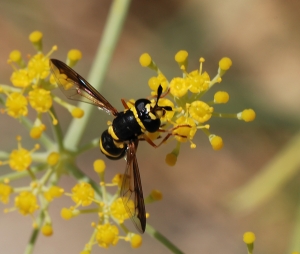 Unlike most wasps, pollen wasps are vegetarian like their bee cousins, being much more mellow in personality and happy to go about their business eating nectar and pollen.  They are quite hard to tell apart from “normal” wasps. However, for the most part, wasps are harmless, and pollen wasps, in particular, do a wonderful job, rivalling that of our honeybees.

Wasps, like bees, have very high demands for energy and favor plants that yield a lot of pollen and nectar, such as orchids, beardtongue, and waterleaf.

Butterflies are beautiful additions to any garden, and they also pollinate our flowers, along with their cousins the day moths. Moths also have the added benefit of pollinating nocturnal plants, which release their scents and nectar at night when most other pollinators are asleep.   Butterflies and day-flying moths enjoy many of the same plants as bees, but due to their long tongues can use many flowers that bees cannot easily reach. Some suitable plants include bluebells, clover, marigolds, pansies, and wallflowers. Night-flying moths rely on flowers that open in the evening and at night – examples include jasmine, some orchids, rain lilies, moonflowers, and evening stock.

Beetles comprise the largest set of pollinating insects and were one of the first to ever begin pollinating plants – in existence! They are responsible for pollinating 88 percent of the 240,000 flowering plants globally – that’s a lot of work! Beetles are a handsome visitor to any garden, and despite their often slow and bumbling appearances, do a fantastic job at getting around fruits and flowers, pollinating them, and allowing the whole ecosystem to benefit.

Beetles have a strong preference for fruit plants, and can often be seen eating from both the fruits and the flowers. They don’t seem to discriminate, being found on both single flowers such as magnolias and lilies, to clustered flowers such as goldenrod and yarrow. Beetles enjoy many weed species, and like the other pollinators mentioned, will benefit greatly from their inclusion in the garden.

Here are four flowers bees need you to plant now.

2 thoughts on “Help Our Pollinators!”